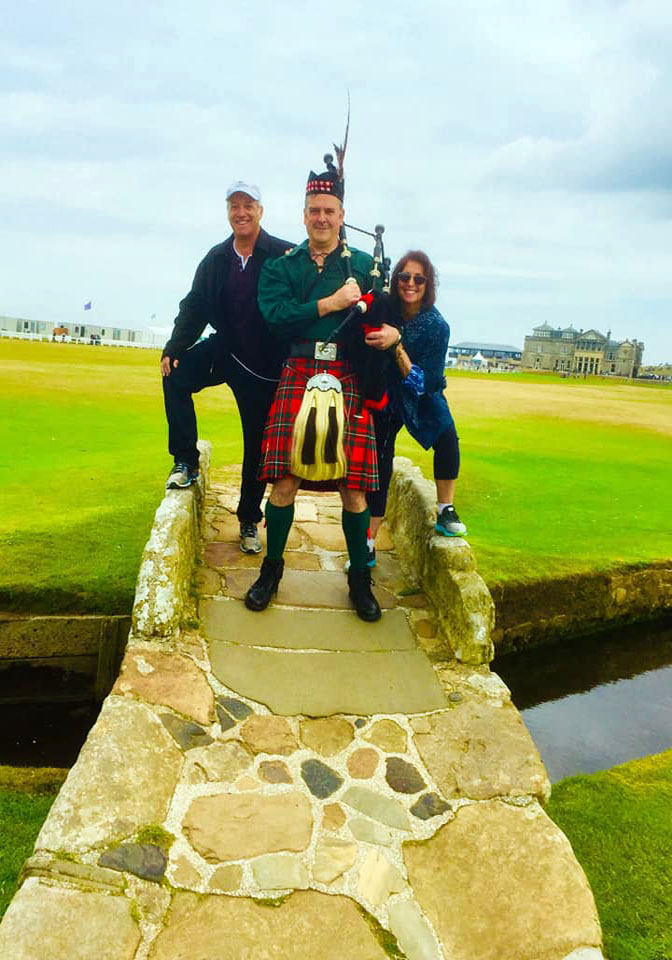 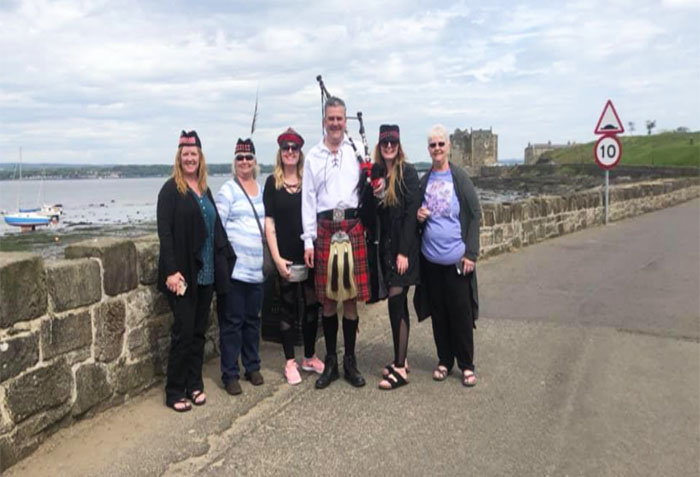 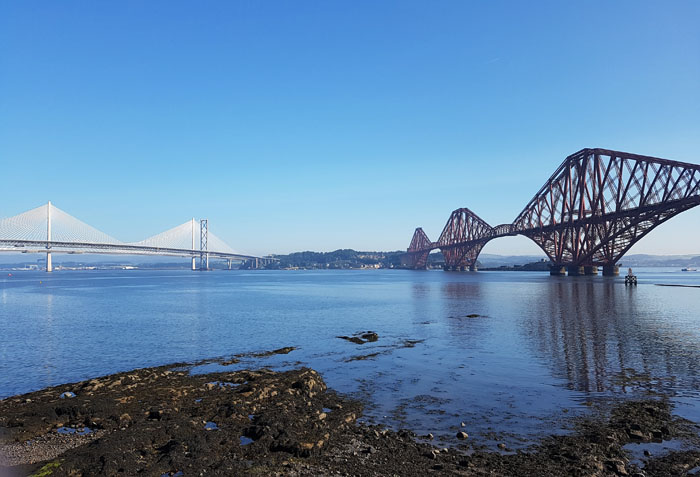 Experience our exceptional selection of Edinburgh shore excursions, to a plethora of fantastic visitor attractions and hidden gems in Scotland. Your private tour can begin from any of the Edinburgh ports, including South Queensferry, Newhaven, Rosyth and Leith. You can choose from one of our pre designed shore excursions, or we can work with you to tailor make your perfect itinerary, meeting your group’s interests maximising your time precious time ashore.

St Andrews and the East Neuk of Fife 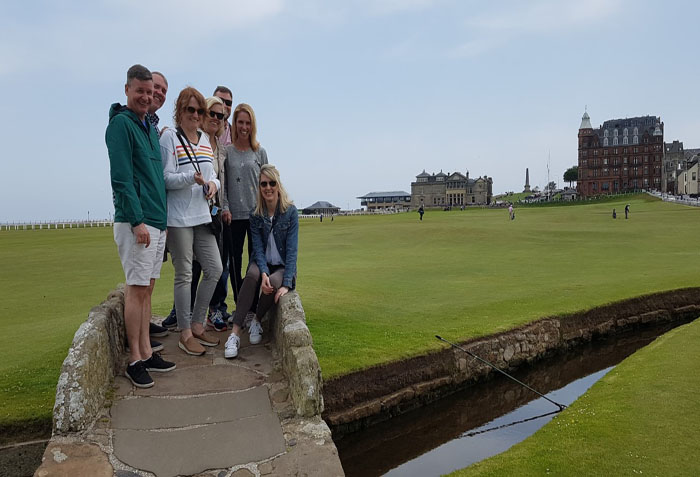 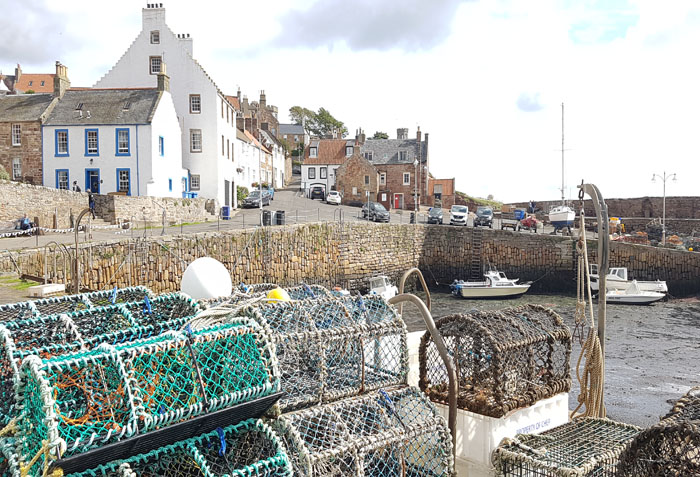 Embark on a spectacular shore excursion to St Andrews, (The home of Golf), in the ancient Kingdom of Fife. Leaving the port behind, you will experience a scenic drive through this ancient Kingdom, to idyllic, quaint fishing villages in the East Neuk of Fife. Our first port of call, is to Elie, with its stretches of golden sands, making it an ideal visitor attraction for families. Just over two miles from here, we can visit St Monans, boasting an historical “Auld Kirk” (Old Church). We travel on to Pittenweem, Anstruther, and the delightful village of Crail. This ancient town dates back to the ninth century, and was made a Royal Burgh by Robert the Bruce in 1310. Hopefully you may get the opportunity to sample some of the superb famous lobster or crab, fresh from the harbourside.

We then journey on ten miles northwest, to the historic town of St Andrews. Here you can enjoy a panoramic tour of the ancient town, taking in the many historical sites. These include; the ruins of St Andrews Cathedral, (which was once the largest cathedral in Scotland), St Rules Tower, St Andrews Castle, the world famous St Andrews University, (where Prince William met his future wife Kate Middleton), and every golfer’s paradise, The Old Course.

Many of our previous visitors have seized the opportunity of having their photographs taken on the old Swilken Bridge, an important cultural icon. This is a ‘must do’ experience for our golfing enthusiast. After a fun, fact filled, adventurous day, we return back to your cruise ship, at the Edinburgh port. 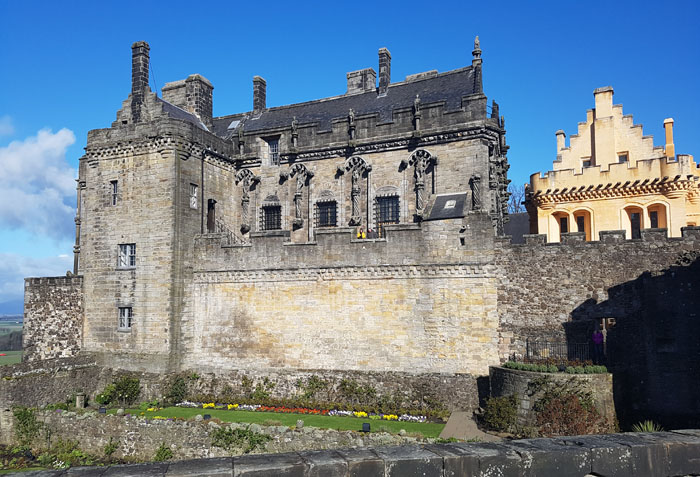 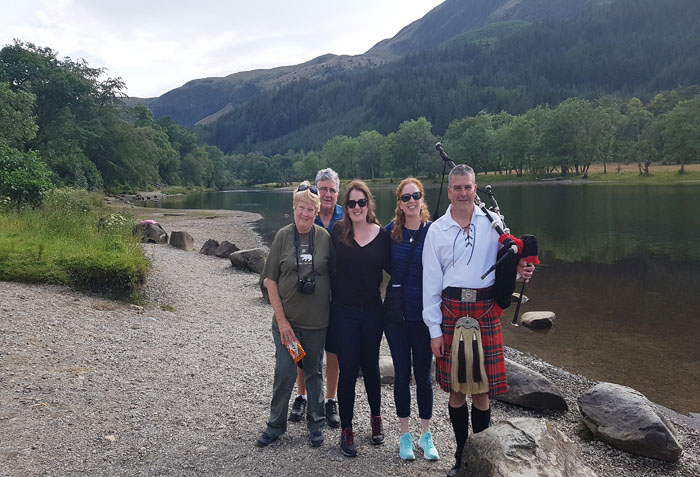 A truly fascinating and historical experience awaits you in the old town of Stirling, only 30 miles west from your port in Edinburgh. Stirling Castle perched proudly upon a volcanic crag, is steeped in history. This iconic jewel is one of the largest and most important castles in Scotland during medieval times.  Explore this ancient castle, once the home of the Stuart monarchy, on a guided tour with one of Historic Scotland’s informative guides.

You’ll be in awe of nature’s canvas, as we leisurely journey through the Trossachs National Park to Kilmahog (to see the Hairy Heilan’ Coos). Travelling on, we stop briefly at Loch Lubnaig, enjoying a wee dram of whisky, whilst listening to the skirl of the bagpipes, courtesy of your tour guide, Graeme. 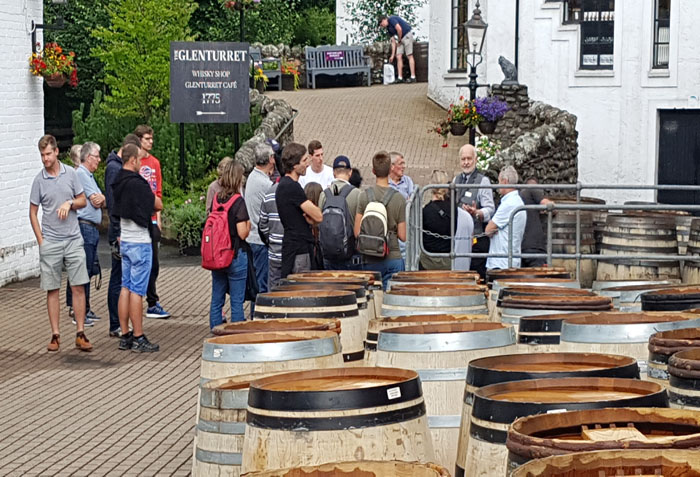 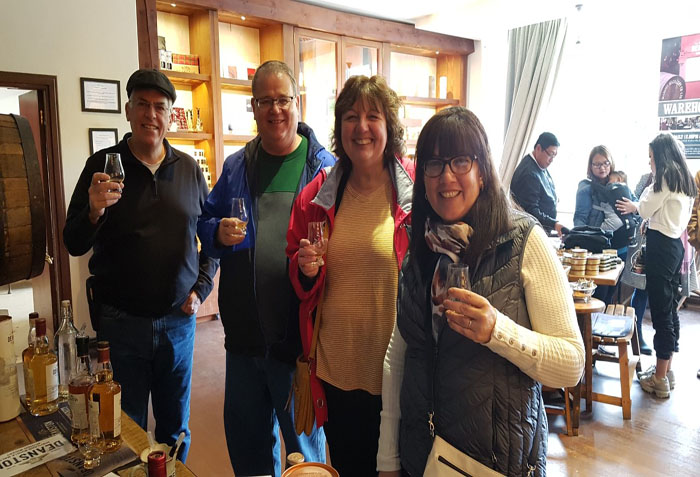 Craft your exclusive whisky experience visiting two world famous whisky distilleries on your spiritual cruise excursion from Edinburgh. You have an ample choice selecting two distillery tours from the famous Deanston, Tullibardine and Glenturret distilleries in Perthshire, all approximately a one hour drive from your Edinburgh port.

Deanston Distillery is a Single Highland Malt Scotch whisky distillery, located on the banks of the River Teith. The former cotton mill, designed by Sir Richard Arkwright and built in 1785, was transformed into a whisky distillery in 1966 and is located in Perthshire, near Doune. A truly wonderful whisky tour experience, which also has its own beautiful shop, stocked with wonderful gifts and whiskies. Outlander fans may recognise this distillery, as it was used as one of the filming locations throughout Scotland.

Enjoy ‘A drop of pure Highland Gold’ at the Tullibardine Highland Single Malt Scotch Whisky distillery. This family owned, independent distillery, dates back to 1488, when King James IV of Scotland, stopped off to purchase beer from the local brewery en route to his coronation at Scone Palace. In 1947, William Delme-Evans began converting the original brewery into the Tullibardine Whisky Distillery. The crystal clear water streams from the Danny Burn, through the Ochil Hills, where gold was once mined.

The Glenturret claims to be the oldest distillery in Scotland and was established in 1775. Nestled in the hidden glen on the banks of the river Turret, two miles north west of Crieff in Perthshire, you can experience the traditional methods of the whisky-making process. View mashing by hand and cutting by eye, before tasting this exclusive whisky on your shore excursion from Edinburgh. 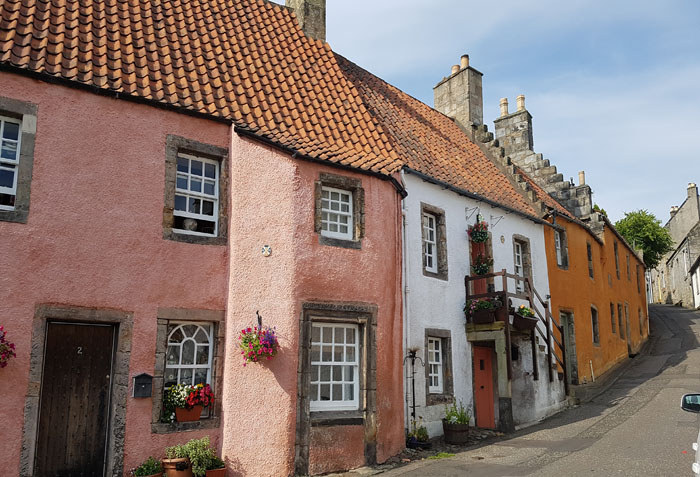 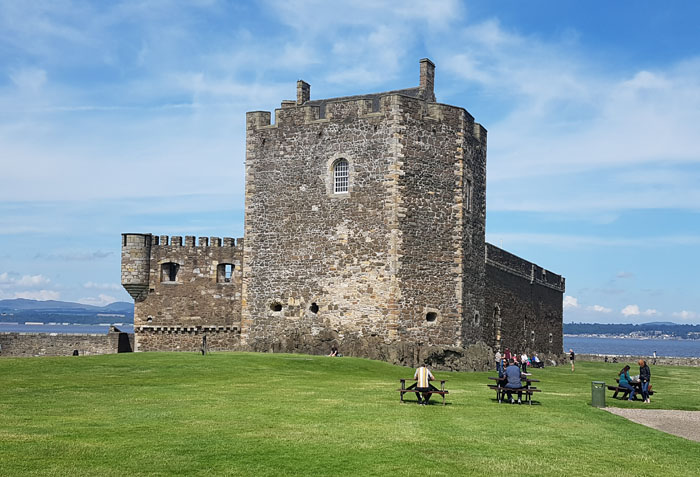 Follow in the footsteps of ‘Jamie’ and ‘Claire’, on this exclusive Outlander Shore Excursion. Let us transport you back in time, taking the short journey to Culross (Cranesmuir), in the Kingdom of Fife. You will have enough to have a short stroll around the best-preserved seventeenth century village in Scotland. Meandering up the ancient cobbled street to Mercat Cross, passing by Haggs Wynd, and Stinking Wynd, you will undoubtedly replay some of the memorable scenes from this sensational series in your imagination. It’s a must see for the real Outlander fan. This quaint little village welcomes tourists wishing to have their photos taken in some of these famous settings.

Our next stop is Doune Castle, better known as Castle Leoch, seat of the McKenzies in Outlander. This fourteenth century medieval castle, 24 miles northwest from Culross, sits on a mound in a bend, beside the River Teith. It was also the setting for the 1970’s hit movie Monty Python and the Holy Grail as well as the pilot episodes of Game of Thrones (Winterfell). Take some time to browse the fantastic selection of Outlander and Monty Python souvenirs, which are available in the onsite shop. There is also the use of audio headsets, which explain not only the purpose of the areas within the castle, but which of the particular areas were used in filming the above movie and television series.

We continue travelling on to Midhope Castle (Lallybroch), home to Clan Fraser in Outlander. This is the mecca for all Outlander fans, a perfect location to frame yourself under the arch of the TV hit series. Please note, the entrance is £3.50 cash per person. It is not possible unfortunately to enter the building.

Our final filming location on your exclusive Outlander tour, is to Blackness Castle, providing the setting for ‘Fort William’. Nicknamed ‘ the ship that never sailed’, the courtyard of the castle was the setting for the infamous scene, where Jamie was on the receiving end of a severe lashing from Captain’ black’ Jack Randall. This scene being one of the programme’s unforgettable scenes, you will recognise it instantly. 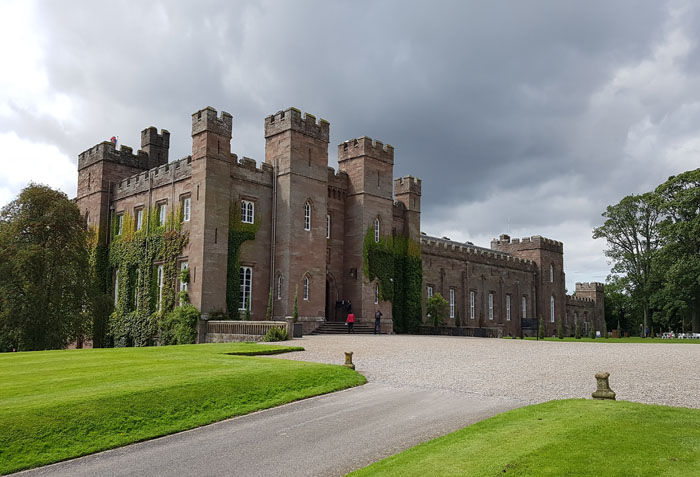 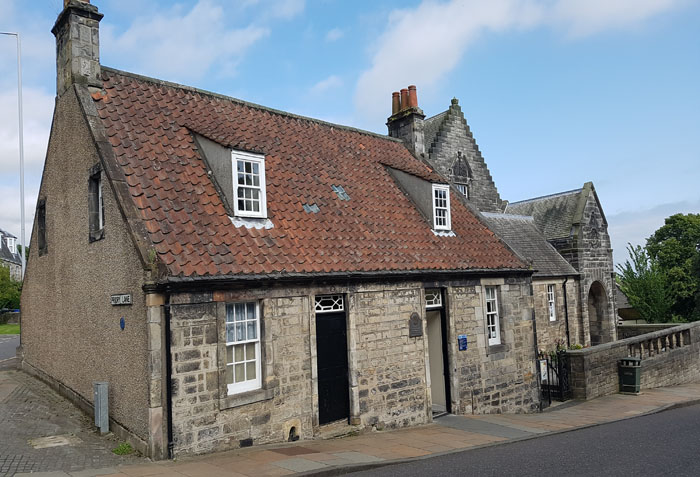 Explore the splendid Palace, and simply stunning grounds of Scone, on this incredible day tour from your cruise ship in Edinburgh. Stand on Moot Hill, where the first King of a united Scotland, Kenneth MacAlpin, was crowned on the Stone of Destiny. Robert the Bruce, in the Scottish Wars of Independence, was also crowned on this famous hill.

Can you solve the mystery of the Stone of Destiny?

After 5 centuries of Scottish kings being crowned at Scone, Edward the First, Hammer of the Scots, removed the sacred stone to Westminster, but was it the real one?

You can ponder this great mystery as you wander through the 100 acres of lush woodland. Don’t forget to try the challenge of the Murray Star Maze before we depart for Andrew Carnegie’s birthplace museum, in Fife.

From rags to riches, we visit the birthplace of Andrew Carnegie, once of the richest men in the world. Discover how Andrew, born in Dunfermline in 1835 a weaver’s son, emigrated to Pittsburgh in the USA, starting up his businesses and became the richest man in the world, as well as one of the most generous philanthropists of all time.

Get in touch today to secure your Edinburgh Shore Excursion from local ports; South Queensferry, Newhaven, Rosyth or Leith. Why not customise your private tour from the ports in Edinburgh, visiting exactly where you would like to go, and what you would like to experience.  Enjoy the beauty of mix and matching your ideal visitor attractions, to make your excursion on the shores of Scotland, a wonderful day to remember for a lifetime. 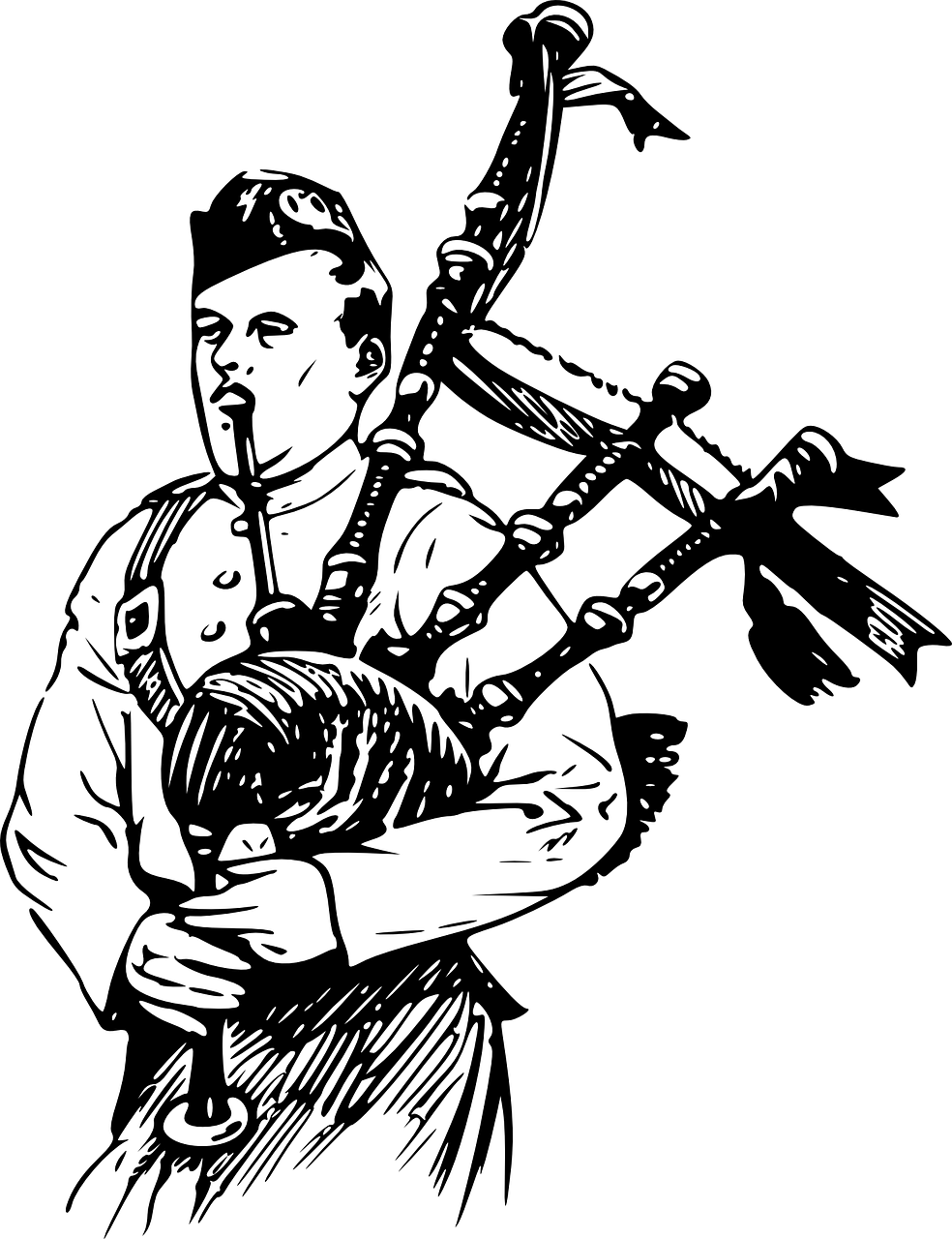 We are always on standby and ready to answer any questions or queries you may have.

If you have any questions regarding our Tours, Excursions or Services we will provide a response within 24 hours of receiving your e-mail enquiry. We are more than happy to help and at a time convenient to you we will call back to discuss your package options. Just drop us an email with your enquiry in the contact box.