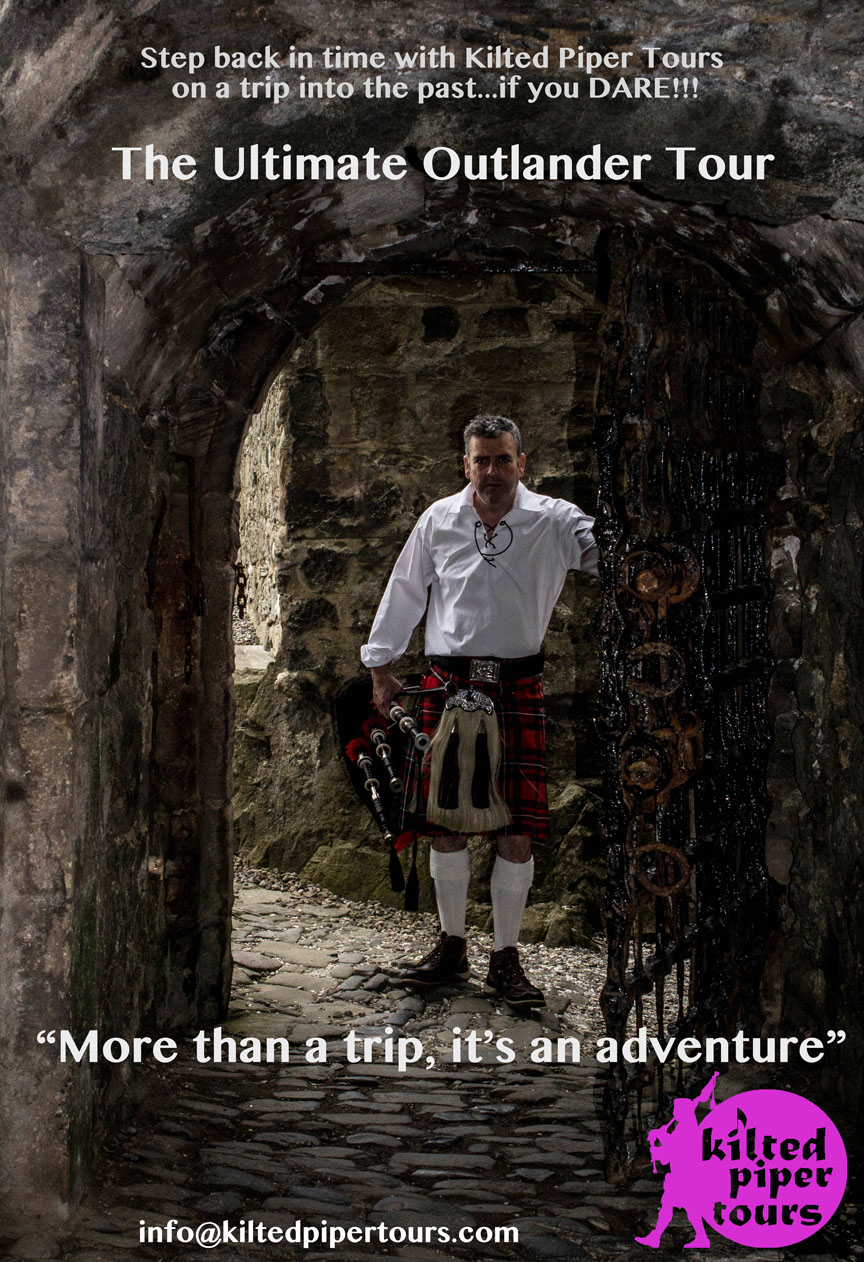 Pick up and return from your hotel/accommodation Glasgow

Contact Us here if you have any further questions. 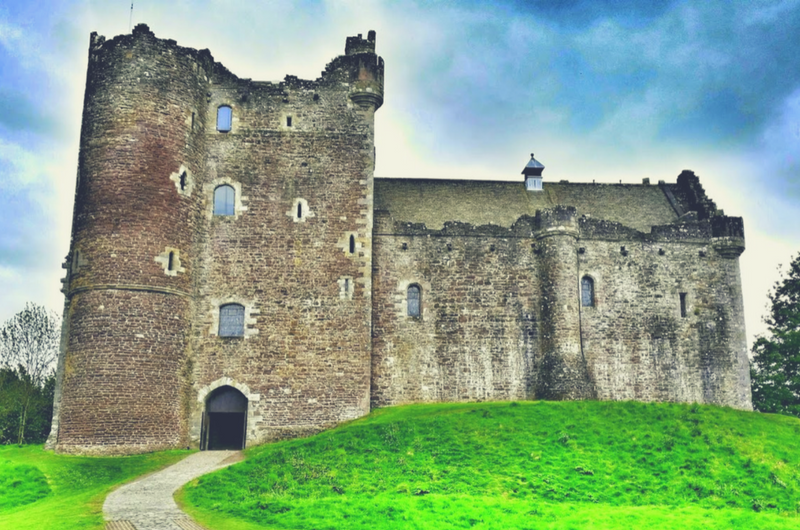 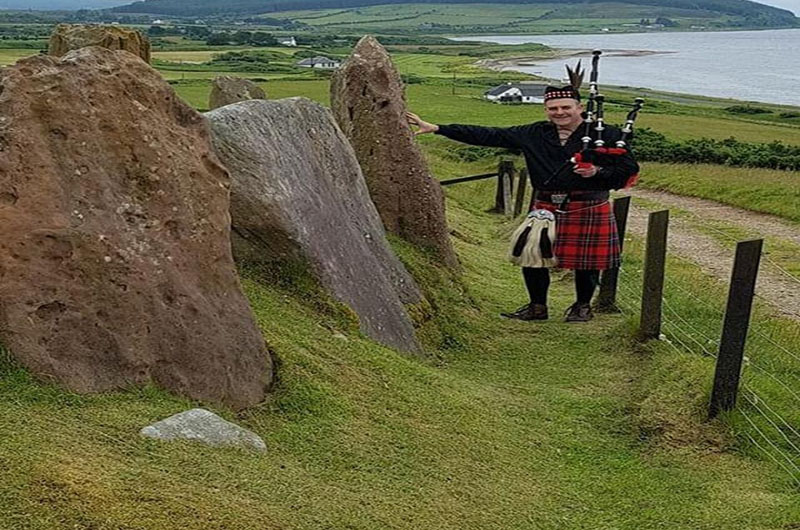 Terrific Outlander tours from Glasgow, a trip of a lifetime for the real die hard Outlander fan. The tour you will be talking about long after your return home, that will make you the envy of your fellow Outlander friends and the one that will make you definitely wish to experience further trips in the future as the series progresses into its 3rd season. Filming for this iconic series began during our ‘dreich’ winter climate in 2013. The locations for the scenes that followed were all set in Scotland, a great deal of them in and around Glasgow.

The Outlander sites in Scotland utilised our stunning scenery, historical castles and gave a warm welcome in the hillsides for cast and crew alike. This series was to bring to life the wonderful writings of Diana Gabaldon’s ‘Outlander’ novels featuring one of the main characters, Claire Randall a 1940’s nurse, who finds herself inadvertently becoming a time traveller, trapped in 18th Century Scotland. Claire, despite being caught up in the times of the Jacobite era, and longing to return to her husband Frank, begins to warm to many of the often uncouth characters, including Jamie Fraser, who is central to this whole saga.

As the reader and viewer, we feel empathy for Claire as she struggles not to reveal her knowledge of what lies ahead and the disaster that will befall her new found friends at Culloden. So now let us take you on a virtual trip of what you can expect to experience with us here at Kilted Piper Tours Midhope Castle (Lallybroch), a tower house built in the 16th century is located near the Hopetoun Estate, in Queensferry near Edinburgh, although in the books and series, Lallybroch is set in Invernesshire. It is the fictional home historically of Jamie Fraser’s family. Unfortunately, you cannot enter the castle, it is in itself beautifully set in attractive surroundings and a great photo opportunity for your Outlander holiday snaps. Hopetoun House was also used in Outlander, as the Duke of Sandringham’s residence, and the house and grounds are fortunately open to the public. From here we travel nearby to Blackness Castle. Blackness Castle (Fort William) This 15th century castle provides the setting for Fort William, the fortress of Black Jack Randall. Overlooking the Firth of Forth, this remarkable castle is also regarded as ‘the ship that never sailed’ this being due to its ship-like shape. It also acts as the setting for the scene of Jamie’s violent flogging by the sadistic Captain Randall…who could forget that infamous scene, and that of Claire receiving a punch by the same callous Captain. The castle itself is steeped in its own history, playing key parts varying from being the house of a Laird, a garrison a fortress and a prison, even being used as the central ammunitions depot in Scotland. The castle was in use, right up until the end of WWI. We resume our journey on to Doune Castle, one of the most instantly recognisable locations …Castle Leoch, Scotland. Doune Castle (Castle Leoch) First appearing in the series in the 1940s, when Claire and her husband, whilst on their second honeymoon in Inverness, come across the old castle. They share a passionate encounter in one of the abandoned rooms, which in a later episode Claire revisits in a flashback. If you know the episode and chapter please share.

Castle Leoch, is home to Colum McKenzie and his clan during the 18th century, playing a major role particularly in the first series, and Claire being kept as a ”guest” of the McKenzie clan. Incidentally, Doune castle was also the location for the famous Monty Python film ”The Holy Grail” and also the setting for Winterfell in ”The Game of Thrones” Doune Castle itself, remains unchanged since it was first built and arguably one of the best preserved medeival castles in Scotland. Moving on from Doune Castle we travel on to the quaint little town of Culross. Culross (Cranesmuir) Stepping back in time, this quaint idyllic little town in Fife depicts beautifully how townsfolk lived during 17th &18th centuries. 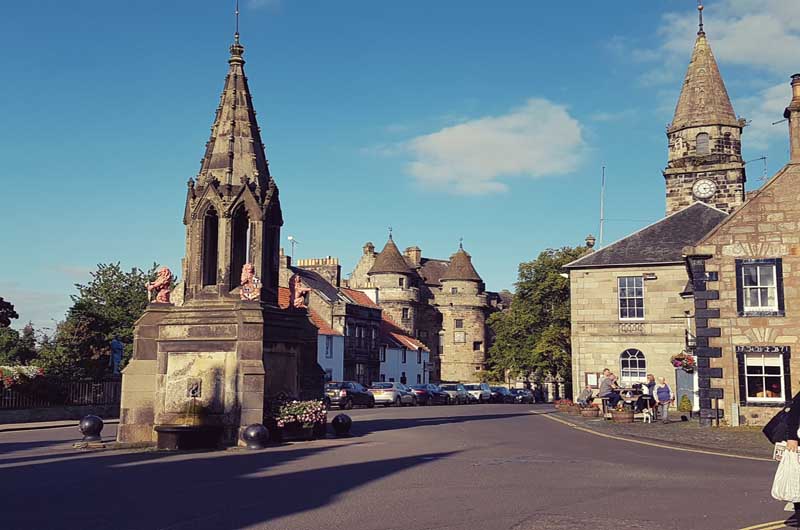 The houses and cobbled streets have been preserved since the 20th century by the National Trust for Scotland. The town itself has been transformed into the 18th-century village of Cranesmuir, where another main character Geilles Duncan resides with her procurator fiscal husband. The cross, in the centre of the town, is the setting for the memorable scene where a village lad is punished for stealing and his ear nailed to a post. Jamie heroically and inconspicuously frees the lad by pulling the nail from his ear. The stunning gardens of Culross Palace are the setting for Claire’s herb garden. The view from the garden is picturesque, overlooking the stunning backdrop of the Scottish Highlands.

This is a day to day living and breathing location, occupied by the locals busying themselves with normal daily life. The shops are real working shops, one you will recognize from episode one, when Claire gazes into Farrell’s furniture shop, at a vase… unaware how much her life is about to change. The town also boasts Falkland Palace , definitely worth a visit and the chance to explore the former country residence of the Stuart monarchs and it’s gardens. We feel confident our Outlander tours from Glasgow will be a day to remember for you and your party. 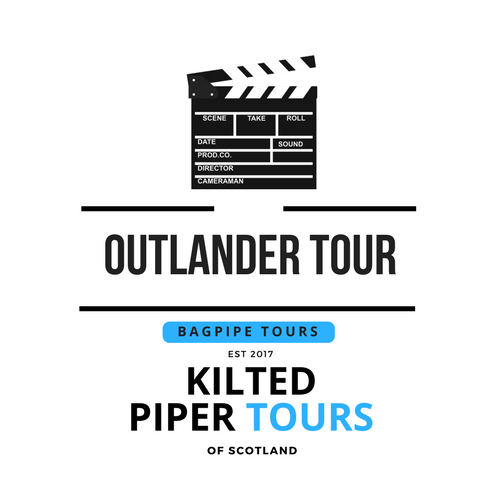 The little town has much to offer visitors to its town, especially the Outlander fans as the gift shop and local Lallybroch Cafe have plenty of Outlander memorabilia, photos, and you can even pose with a cardboard image of our hero Jamie !! Mystery Extra – undisclosed until the day…a little extra location to add to your holiday snaps. Falkland Finally we conclude your tour with a visit to the picturesque historical town of Falkland. This is the initial setting of the first episode of Outlander, supposed to be set in Inverness, but in fact located in Fife.

“Remember, we provide an accompanying piper and a ‘wee dram’ on all Outlander Tours from Glasgow. Edinburgh pick up points available. Pick up and drop off from your Outlander tour to your Glasgow hotel or accommodation.